These vessels are designed to provide you with a very comfortable and relaxed time out on the water while also providing you with a fishing experience you’ll never forget.

The boats are equipped with a generator that allows for air conditioning in the cabin on those hot summer days. Whether it’s a family of 6 looking for a great time together or a couple of hardcore fishermen looking for some serious knockdown drag out action. These boats are ready for everything from trolling the blue water for pelagic species, chumming the reef for meat fish, or drifting the wrecks for the mighty amberjack.

Trolling
Trolling is a style of fishing that involves dragging baits behind the vessel while in motion. The baits can be anything from dead ballyhoo, lures, feathers, skirted ballyhoo etc. We can troll these baits as slow as a 1 knot drift with live ballyhoo for Sailfish or as fast as 10-12 knots with feathers for Tuna. The bait, the speed.. It all depends on what we are targeting.Blue water species are our main focus. This group includes for the most part Dolphin (Mahi Mahi), Wahoo, Blackfin Tuna, and Sailfish.

Dolphin (Mahi Mahi)
A beautiful fish and a Florida Keys favorite in the Spring and Summer. These fish are most commonly found in waters from 100 feet deep out to well over 1000 feet deep. Although we occasionally see them crashing baits up on the reef in as shallow as 20 feet of water. They range from small peanut dolphin (1-2 pounds) to super slammer dolphin (50+ pounds) and can reach sizes close to 100 pounds although rare. The smaller dolphin in the 1 to15 pound range tend to travel in large schools and as they grow larger the schools become smaller. This is one reason why dolphin fishing can be so much fun. Imagine hundreds of these fish swarming under the boat and eating anything you throw at them, catching one after the other. This certain scenario can come about while trolling offshore on weed lines and current edges, especially if there is a large floating object in that weed line. Weed lines and floaters create a habitat and a hiding place for small bait fish and these bait fish attract larger fish such as dolphin. We can troll past these fish and hook them up on our trolling rods or cast jigs at them with small spinning rods. All are productive means of catching schoolie dolphin. Now for the big boys… Larger dolphin tend to travel in very small schools (less then 5 fish) if not alone. The most common grouping of larger dolphin seen is the bull and cow. Bulls are males and cows are females, they are easy to tell apart due to the shape of their heads. The bulls have a squared off forehead while the cows have a gentle slope. Once one fish is hooked the other fish tends to stay with the hooked up fish most of the way to the boat. Because of this more times than not we  are able to cast a bait at the free swimming fish and hook it up as well. A good day for dolphin can consist of many many schoolie dolphin 8-10 pounds or that one 50+ pound trophy. These fish are excellent fighters whether they’re small or large, multiple jumps and quick runs are a guarantee.  The food quality is outstanding with a lot of meat per fish.

Wahoo
The very name of this fish gives it all away….Waaaahhhhooooo! Wahoo are found in a lot of the same areas as Dolphin and caught on the same baits. Although when targeted specifically tactics become more direct. Wahoo like a fast moving bait that they can chase and hit on the run. A fast trolling speed and a lure rigged with cable is one method that we execute often. Also a slower troll with a bait put deep on a downrigger is also quite effective. In addition to being found on weed lines and floaters, Wahoo can be found around wrecks and deeper areas of structure throughout the Florida Keys. The fight these fish are capable of is exceptional as well as the quality of the meat. Very fast and long runs with an explosive first strike is a given. Ranging from 10-100+ pounds and most common from 20-40 pounds.

Blackfin Tuna
Blackfin Tuna here in the Florida Keys range from 1-30 pounds and are most commonly found from 10-15 pounds. They are a schooling fish as are all tuna, so multiple hook ups can happen often. We find these fish just off the reef in less than 100 feet of water and out to well past 1000 feet of water. There are three different techniques that we use for catching Blackfin tuna on a regular basis.

Vertical Jigging
Tuna do have a tendency to favor structure in shallower depths. Our wrecks in 180-400 feet often hold these fish. We mark them on our electronics, they show up as a ball of fish usually between 100 feet and the surface. Then we take a jig that looks like a 6-8 inch piece of metal painted to look like a fish with a hook at the top, and drop to the depth we see these fish and JIG! All of a sudden you’ll go to lift the rod and it just wont come up! Then the drag starts screaming and fish on!

Live Chumming With Pilchards
Probably one of the most fun and action packed forms of fishing for Tuna. We start the day by loading up the live well with at least 500 pilchards. Pilchards are a small baitfish 3-6 inches long that every single fish in the  Florida Keys will happily eat, especially Tuna. We then make our way to our Tuna spot and anchor up the boat. Usually in 200-250 feet of water. Now we take handfuls of these baits and start throwing them out behind the boat creating a school of baitfish that will raise these Tuna. We then put out a few Pilchards with hooks in them and drift them back… Game on! Along with all the Tuna, one of our locations is home to a number of very large Bull Sharks and Hammerheads as well as plenty of Kingfish. These Sharks will actually come right to the back of the boat in search of something to eat, and when hooked can put up a very tough fight.

Trolling Feathers Fast
When Tuna are feeding they are very easy to spot due to the way they feed on the surface and the amount of birds that are usually attracted to this kind of a feed. The only problem is that these fish move very quickly and if trolling slow, almost impossible to catch up to. To solve this problem of speed we kick it up a notch and use a small feather type lure that can be trolled at 8-12 knots with ease. This allows us to catch up to these fish and get them on the line. This style of fishing  can result inmultiple fish at once because we troll 4 baits through the school at a time. It could be one rod that goes down or all 4. Blackfin Tuna are excellent to eat with true sushi grade meat and also wonderful any other way its cooked.

Sailfish
Sailfish are of course a billfish and as majestic as any other billfish. They can be caught all year around all though much less common in the Summer. Our best time for Sailfish is from December through April with a good bite throughout and a few weeks in that period that are just spectacular. They can be caught while trolling ballyhoo, drifting live ballyhoo on the edge of the reef, chasing bait sprays on the reef along with other methods. One of our favorites is chasing bait sprays with our center console. In those spectacular weeks when we have mass migrations of Sailfish come through this becomes an excellent option. A bait spray is when a school of ballyhoo is being chased by a Sailfish or some other fish. This causes these baits to jump out of the water by the hundreds trying to escape the predator behind them. We then run up to the school and cast a live ballyhoo at the fish behind them hoping for an eat. This is the most involved way to catch Sailfish and by far the most fun. Its up close and personal and a really great time. Sailfish are an outstanding fight on heavy spinning rods which is what we use on a regular basis. Acrobatic jumps and “tailwalking” and beautiful photo at the end to go with it. 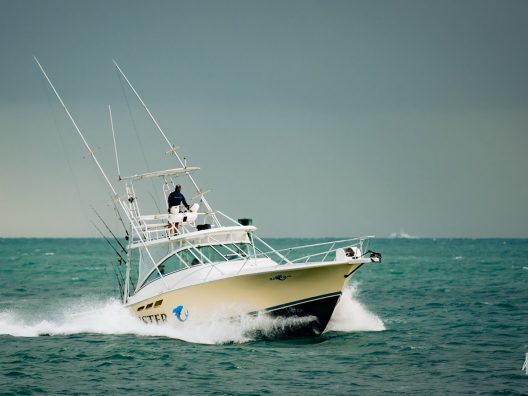 Spend The Day Your Way