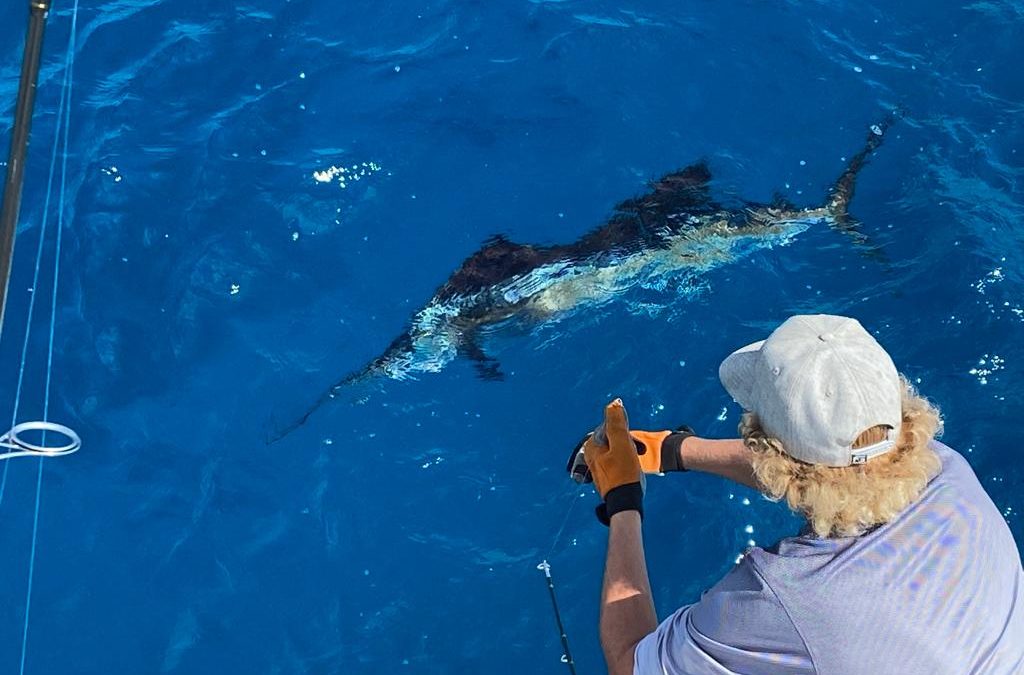 Sailfish, or spindlebeaks (due to their long and spindly bills), converge on South Florida and the offshore waters of the Keys from November through April most years. I usually fish these highly acrobatic speed demons seriously from the month of October until about early May. The peak season appears to follow the third major cold front, driving down water temperatures and bait. I advise all of my clients that late November to early February is peak–where one can expect consistent catches that often come in double digits, nearly duplicating any Central American Country or Isla Mujeres fishery.

Early in the season, in late November, our catches seem to spike for a few weeks, then remain constant and spike again with every cold front, lasting several days.

The techniques to catch these neon iridescent speedsters of the sea, vary significantly. In South Florida and the Keys, live baits, in the form of goggle eyes, small blue runners, cigar minnows, and larger pilchards suspended from kites, are the most common approach employed by most charter captains.

Another approach is watching for spraying fish in the reef and patch reefs, where sails will converge upon schools of bait and, in their attempt to escape, become airborne, thus resulting in the “spray”. This can be a very exciting “hunt” for these fish, as well as an exciting sight when cast to individual sails. This action is generally accompanied by frigate birds and gulls diving in on the bait. This is mostly a one-on-one scenario, with your captain positioning the boat for an ideal cast to the hungry sail.

Inexperienced fishermen should allow the mate, or even the captain, to cast and hook these sails, as most yank the bait out of the fish’s mouth, not giving the sail enough time to swallow the bait and letting it go from the slightest pressure on its mouth. This, while trolling, has traditionally been called “dropping back”, but, in this case, when casting with a spinning reel, leaving the reel in free spool as the fish continues to strip line fast, is something that comes with practice to know when to come tight on the fish. We use Owner Mutu Light # 5 hooks that require only coming tight on the fish and letting the circle hook do its job.

The other common approach is trolling live ballyhoo, or other live bait with multiple lines, as well as employing natural dredges of the same fish. This technique, although at a higher fuel consumption, in my opinion, covers more ground and, in my case, outfishes the kite technique. Another technique, when sails are a bit skittish and non responsive, is as follows. I employ trolling with downriggers at different depths with live bait, as I do for blue marlin in the summer months. I use, what I call, “My Lake Michigan Approach”, which is a combination of top, mid and deep patterns to entice these fish into producing a violent strike! We often have multiple hook-ups in this technique that cause sheer pandemonium on deck.

Some other techniques are the bait and switch techniques, which I have employed in Mexico and Central America. Fresh, dead ballyhoo are trolled at higher speeds in the traditional “W” or “Diamond Pattern” and, when a sail comes into the spread, a live bait or fly is presented to the fish, often right at the transom. There is nothing quite as hair raising as seeing, and teasing up, an electrified and fully lit up sail, wondering where all the baits have gone, and then presenting one solitary morsel of a nose-hooked, live bait. If you have not become accustomed to catching sails this way…you haven’t sail-fished. This is by far the most exhilarating show that “Mr. Showmanship” can produce. It is what stories and memories are made from for years to follow. Although this technique is seldom, if ever, used here, it does bring in fish that are not responding to the usual approaches.

The key element to this fishery is live and fresh bait. For kites, gogs are the candy, whereas the other methods are a bit more forgiving with live bait selection.

Throughout December and January this year, we had those kind of shows. We employed every tactic we had until one, or several, would work consistently. On our best day we had 10/14 releases without even employing the kites. The following day produced 3/6 and the subsequent day, 5/7. Our clients were so impressed that traveling to Mexico or Costa Rica became less of an option for these US residents. Winter sails in the Keys rival some of the places in these Central American fisheries and are available within several hours from most major US cities and fishing several days can be accomplished in a single long weekend. I advise my clients to book a week prior to a cold front and, at times, to buy tickets within a day’s notice of this incredible hot action. Obviously, availability on both is the deal breaker, as bookings for this time of year are generally a six months to a year in advance.

If you haven’t fished Islamorada for sailfish at this time of year, you are missing out on one of the Keys’ best fish to battle, the sailfish.

ON THE OTHER SIDE OF THE STREAM…
While we fish Bahamian waters, this time of year can be a bit frustrating knowing the fishing is phenomenal for wahoo but making the crossing can be a bit uncomfortable in the heavy seas.
The wahoo are numerous in the Bimini area, as well as throughout the Bahamas. The fish generally average 50 lbs. to some real bruisers.  Dolphin begin showing up at this time of year too. With a good SE wind blowing for several days, dolphin, tuna, and a few marlin, stack up at “The Pocket”. Along with dolphin, look for triple-tail in the weeds and, again, a few blue marlin. That makes the bite exciting, as you never know what will blast that short flat line with your largest lure!

This time of year, you will also find sailfish, amberjack, barracuda, kingfish and, the ever present, snappers. “Deep dropping” for yellow eye and queen snapper often interrupts the AM and PM low light wahoo fishing.

While the temperature plummets and the winds spike up white foam on the waves, the sails of winter will leave your muscles cramped and memories aglow! 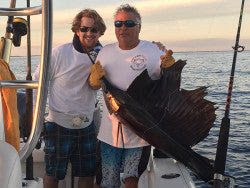